What does the Bible say about Astrology, Witchcraft and Idolatry?

What does the Bible say about Astrology, Witchcraft and Idolatry? A list of scriptures compiled by Arletia Mayfield aka The Prophetic Scribe. 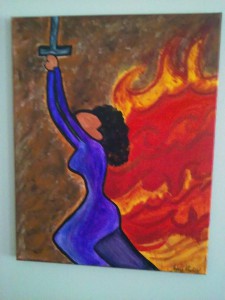 There shall not be found among you anyone who makes his son or his daughter to pass through the fire, or that uses divination, an observer of clouds, or a fortune-teller, or a witch, or a charmer, or a consulter with familiar spirits, or a wizard, or one who calls to the dead. For all that do these things are an abomination to Jehovah. And because of these abominations Jehovah your God drives them out from before you. (Deuteronomy 18:10-12)

And he caused his sons to pass through the fire in the valley of the son of Hinnom. He also practiced secret arts, and used fortune-telling, and used witchcraft, and dealt with mediums, and with soothsayers. He did much evil in the sight of Jehovah in order to provoke Him to anger. (2 Chronicles 33:6)

And the spirit of Egypt shall fail in the midst of it, and I will destroy its wisdom. And they shall seek to idols, and to the enchanters, and to the mediums, and to the future-tellers. And I will shut up Egypt into the hand of a cruel lord; and a fierce king shall rule over them, says the Lord, Jehovah of Hosts. (Isaiah 19:3-4)

For so says Jehovah of Hosts, the God of Israel: Do not let your prophets and your fortune-tellers in your midst deceive you, nor listen to your dreams which you dream. (Jeremiah 29:8)And I will cut off sorceries out of your hand, and there shall not be fortune-tellers among you. (Micah 5:12)

My people seek advice from their wooden idols, and their rod declares to them. For the spirit of harlotry has caused them to go astray, and they have gone lusting away from under their God. (Hosea 4:12)

The astrologers answered the king, “There is not a man on earth who can do what the king asks! No king, however great and mighty, has ever asked such a thing of any magician or enchanter or astrologer. (Daniel 2:10)

The king called out for the enchanters, astrologers and diviners to be brought and said to these wise men of Babylon, “Whoever reads this writing and tells me what it means will be clothed in purple and have a gold chain placed around his neck, and he will be made the third highest ruler in the kingdom.” Then all the king’s wise men came in, but they could not read the writing or tell the king what it meant. (Daniel 5:7-8)

They [the bones of the people of Jerusalem] will be exposed to the sun and the moon and all the stars of the heavens, which they have loved and served and which they have followed and consulted and worshiped. They will not be gathered up or buried, but will be like refuse lying on the ground. (Jeremiah 8:2)

He [Josiah] did away with the pagan priests appointed by the kings of Judah to burn incense on the high places of the towns of Judah and on those around Jerusalem–those who burned incense to Baal, to the sun and moon, to the constellations and to all the starry hosts. (2 Kings 23:5)

If a man or woman living among you in one of the towns the LORD gives you is found doing evil in the eyes of the LORD your God in violation of his covenant, and contrary to my command has worshiped other gods, bowing down to them or to the sun or the moon or the stars of the sky, and this has been brought to your attention, then you must investigate it thoroughly. If it is true and it has been proved that this detestable thing has been done in Israel, take the man or woman who has done this evil deed to your city gate and stone that person to death. (Deuteronomy 17:2-5)

The houses in Jerusalem and those of the kings of Judah will be defiled like this place, Topheth–all the houses where they burned incense on the roofs to all the starry hosts and poured out drink offerings to other gods.'” (Jeremiah 19:13)

those who bow down on the roofs to worship the starry host, those who bow down and swear by the LORD and who also swear by Molech, those who turn back from following the LORD and neither seek the LORD nor inquire of him. Be silent before the Sovereign LORD, for the day of the LORD is near. The LORD has prepared a sacrifice; he has consecrated those he has invited. On the day of the Lord’s sacrifice I will punish the princes and the king’s sons and all those clad in foreign clothes. (Zephaniah 1:5-8)

You have lifted up the shrine of your king, the pedestal of your idols, the star of your god — which you made for yourselves. Therefore I will send you into exile beyond Damascus,” says the LORD, whose name is God Almighty. (Amos 5:26-27)

If you have been convicted by these scriptures, pray a prayer of repentance.  If you do not know what to say, here is a guide:

I am sorry for my sin.  I was ignorant and did not know what I was doing.  Please forgive me and cleanse me of anything that is not like you.  Lord, I give my life to you.  I believe Jesus is the son of God and that he was raised from the dead and through his blood sacrifice I am forgiven and receive grace for everything I have done and the mistakes that I will make in the future.  I invite the Holy Spirit to come into me and lead me and guide me into all righteousness.  I don’t want to be ignorant anymore.  I renounce every spirit of divination, witchcraft, idolatry, and psychic activity that I have allowed to enter.  I now serve them with an immediate eviction notice and command them to leave me, my family and my household.  I turn away from these things and turn to you my soul’s salvation.  I accept your forgiveness and promise to follow you for the rest of my life.  Amen.

NOTE:  The prayer of salvation is included in this prayer because you cannot fight spiritual forces without Holy Spirit, so you must be born-again so Holy Spirit can fight your spiritual battles.

But ye shall receive power, after that the Holy Ghost is come upon you: and ye shall be witnesses unto me both in Jerusalem, and in all Judaea, and in Samaria, and unto the uttermost part of the earth.  (Acts 1:8)

If my people, which are called by my name, shall humble themselves, and pray, and seek my face, and turn from their wicked ways; then will I hear from heaven, and will forgive their sin, and will heal their land. (2 Chronicles 7:14)

Arletia Mayfield is called The Prophetic Scribe because she writes under the direction of the Holy Spirit.  She is an ordained minister and Bible teacher. She is an author and the publisher of TPS Publications providing resources and tools to creatively share the Good News of the Gospel of the Jesus Christ.

Family photos are more than just a picture; they are a representation of the memories, milestones, and stories that make up your family history. The Prophetic Scribe

Writing a eulogy can be an emotional experience, but it is an important part of honoring and remembering a loved one. Here are some tips to help you write a meaningful eulogy:

The Art of Storytelling

The art of storytelling is about more than just writing or speaking a story. It’s about creating a vivid and immersive experience for the audience. The Prophetic Scribe

If the thought of writing an autobiography is overwhelming, consider writing a memoir instead.

Thank you for visiting The Prophetic Scribe Magazine.  We hope you are inspired by something here. Please bookmark this site, visit us again and tell your friends about this ministry/ business.

Your product purchases help support the ministry of The Prophetic Scribe. In addition, as affiliates, we may receive a small commission when you shop through links on this page.  There is no additional cost to you. It just helps us a little with the expenses involved in making this content available to you.

We also accept non-tax deductible donations for those of you who were blessed by something here or just want to  support the literary arts.  A portion of all donations and income are paid forward to help support charitable organizations.

We appreciate any support that you are willing to give.  We thank you in advance for blessing us.